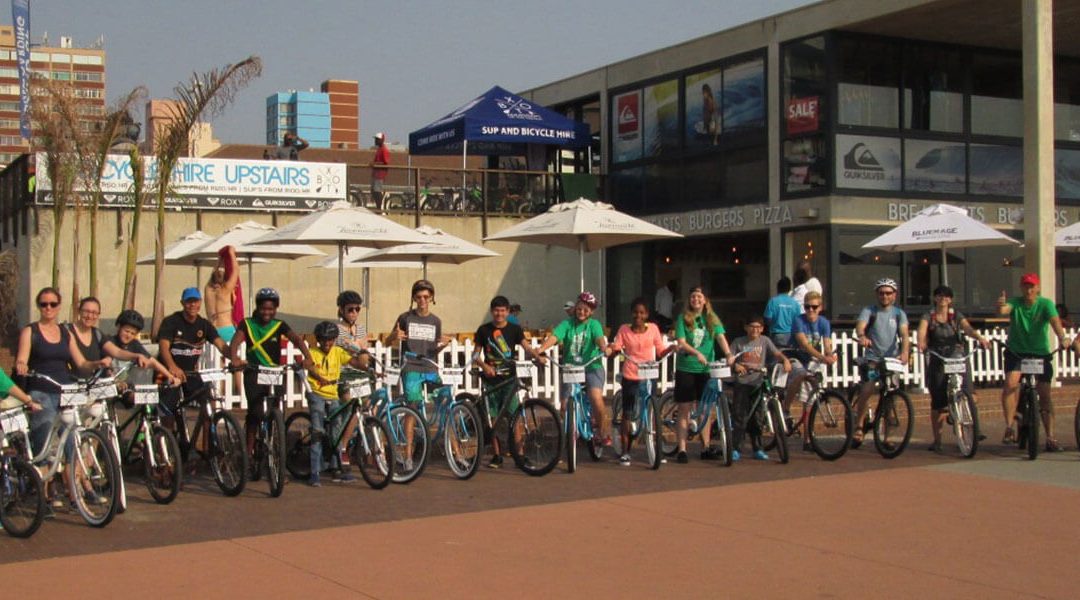 One time when we were in Durban, we arranged a field trip to uShaka Beach for the 6-12th graders. It is a very long beach waterfront. A couple of teachers went down first and inquired about renting bicycles, then went along the beach walkway to find ideas for a photo scavenger hunt.

The teachers worked together to create a fun challenge for the kids. Each group would have to follow clues to find certain things along the paved beach walk. When they found the clues, they had to use their Academy cameras to take photos of themselves at those sites. The challenge was to beat the other groups back to the beginning point with all the clues resolved.

High school students to lead it, and some middle schoolers to round out the group. Thirteen kids were onboard in grades 6-12 at that point, so we made two groups of four and one group of five. Each group would have an accompanying teacher, also on a bike.

Permission slips went out to parents for kids to have a field trip to the beach. If they had bike helmets, they needed to bring them, along with a pack lunch, water bottle, hat, and sunscreen. Everyone was getting excited about an action-packed field trip!

When we arrived, the PE teacher and Principal took the teachers and kids in one by one to get their bikes. It took a bit of time, but finally we were all assembled on the waterfront, lined up and ready to go. The principal announced the groups, and gave each student group leader the challenge clues to the treasures and a camera to document their success. A teacher was also assigned to each group (but not to help find the treasures).

One of the things I love about our Academy is how close-knit the kids are. No one complained about being grouped with kids that were 4 to 6 years different in age than they, because kids onboard are like a big family—like siblings. They were excited to have a wide-open paved area to ride bikes down, and the challenge of finding their treasures. The fact that it was in South Africa only made it all the more exciting!

The principal gave each group a few minutes to study their challenges and to make a plan, then he blew his whistle and they were off! Some of the smaller kids had trouble on their much smaller bikes keeping up with the 26-inch wheels of the high school seniors, but they worked it out. Soon the groups were spread out along the beach front, watching for anything that looked like their clues.

They went down water slides, photographed sand carvings and signposts, and laughed a lot as they madly bicycled down the long stretch of waterfront.

After all had returned to the starting point, we took a lunch break while the bikes were returned, then we headed down to the beach for games and a fun swim. It was a great bonding adventure and PE extravaganza that everyone enjoyed.