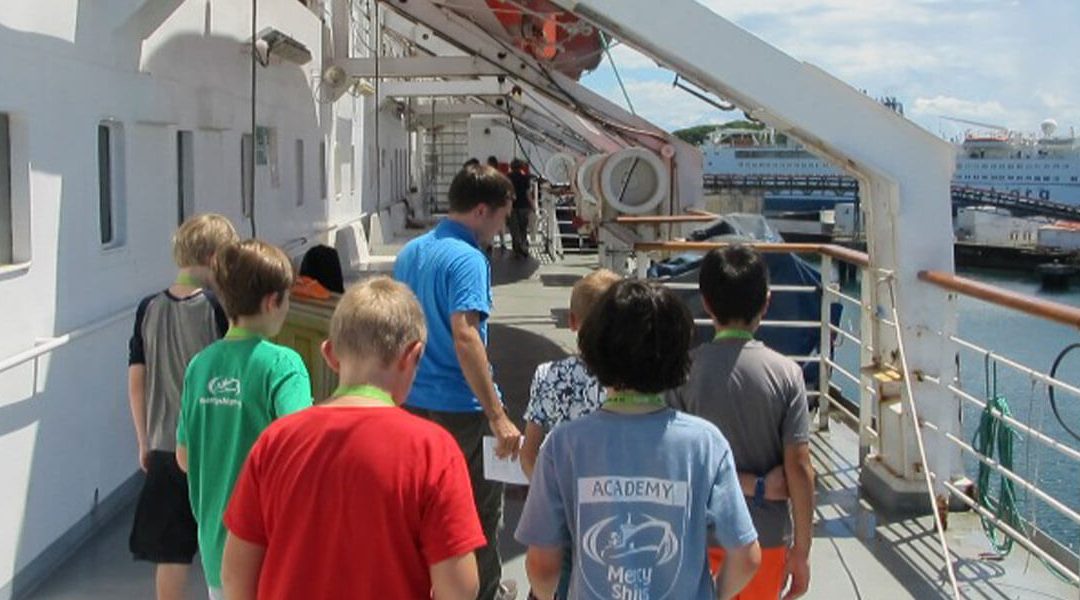 In January, 2016, the M/V Logos Hope came into port in Madagascar and moored at the pier next to where the Africa Mercy was stationed amidst much cheering and delight. The two ships looked like twins, as both were commissioned from retired ferries.

Here you see the Africa Mercy Academy principal and his wife, together with a few teachers and students, watching the ship glide into port. All along the waterfront people held flags of their nations, welcoming in another multi-national ministry ship. An entire library had come to town! More than that, another ship with its own school onboard.

We were all invited to visit over the next week for tours. It was fun for our students to learn about life in a different ship with its own unique school!  The M/V Logos Hope offered library services in countries that had little access to printed texts. They also had a store where locals could buy texts in various languages, from pleasure reading to academic textbooks to research topics. We enjoyed looking through their materials, and some of the parents were excited to purchase children’s books in their own language. The Logos Hope crew, in turn, had fun visiting our ship and school. The Logos Hope teachers shared how they worked 5 days in the classroom, and then went out with evangelical teams another day of the week, ministering in the local town where they had arrived.

This was a mandatory part of their ship service, and we learned of skits, talks, music shows, and other evangelical outreaches the teachers and parents had participated in. Considering how quickly they changed countries, we were amazed at how flexible and creative they were coming up with new plans of how to reach different people groups. Our teachers, in turn, shared various Mercy Ministries they had volunteered with, working with the elderly, with orphans, visiting prisons, and ministering to the blind.

They arranged for all the teachers from our Academy to spend an afternoon with their teachers, touring their classrooms and discussing how their curriculum was organized. They offered classes through age 11, grade 6, following the British educational system. Like our Academy, they taught in English, and English was also the primary language of their ship, and the crew was very parallel our crew in its roles and multi-national character. It delighted kids from both ships to see other kids who understood the life of an MK on a ship that changed ports regularly, though our kids were amazed at how much time the kids aboard the Logos Hope spent sailing. Our ship only sails twice a year—from refit (usually in Tenerife) to a West African port, then back again!