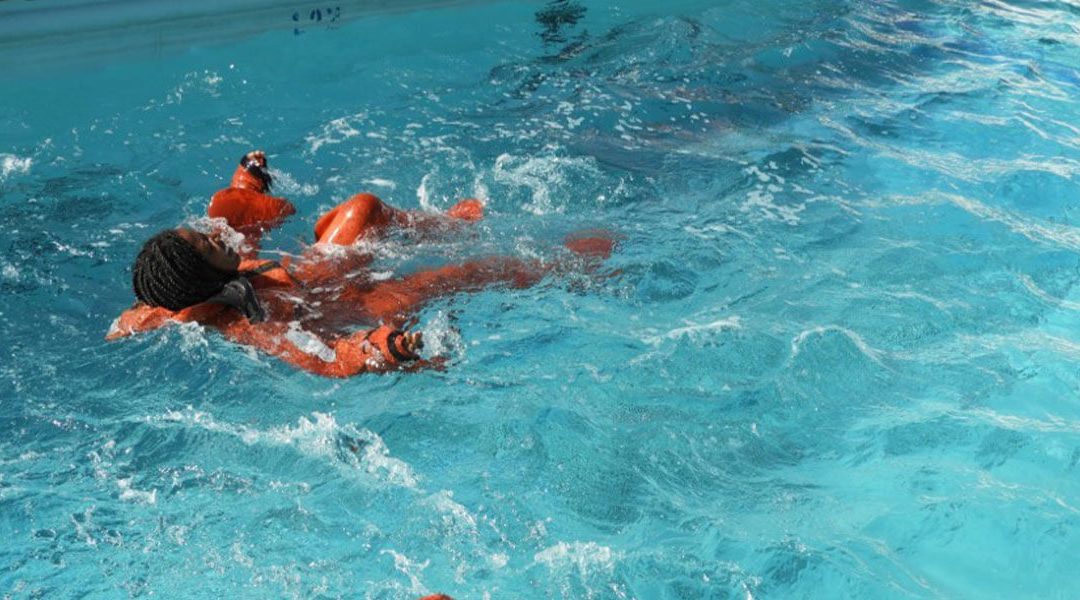 The AFM has a swimming pool on its top deck which the whole crew enjoys. However, one day it was put to an extraordinary use.

Our Safety Officer took the upper grades (6-12) to the pool to learn about survival at sea. First, they had to don the heavy at-sea survival cold water immersion suits and swim two laps. What a challenge! Not only is the large suit wet inside and out, sticking to a person as he or she tries to put it on, but it is stiff and heavy. As a result, it took a team of kids to help their peer don such a suit.

To make it more fun and challenging, the instructor separated the students into two teams and had them do relay races. Each team member had to put on the immersion suit and swim two laps, then get it off to help the next student to put it on. There was much laughter and a new appreciation for people who survive ship wrecks at sea as students squinted and splashed their way through the water, kicking awkwardly on their backs.

Next, he challenged them to jump into the pool with the traditional life vest on. Each week at sea we have fire drills in which we must go to designated locations and put on the life vests, as if ready to enter life boats. So, this was nothing new for the kids. However, they had never tried to go into the water with them on! They had to jump feet first, ankles crossed, with their arms crossed over the vests and hands pulling down on them so they did not smack the wearer in the jaw. After successfully entering the water, they had relay races, of course! The students had no idea how hard it was to swim in such contraptions. It gave them a new appreciation for the at-sea instructions on what to do if one had to jump overboard wearing a life vest.