No Matter How Small 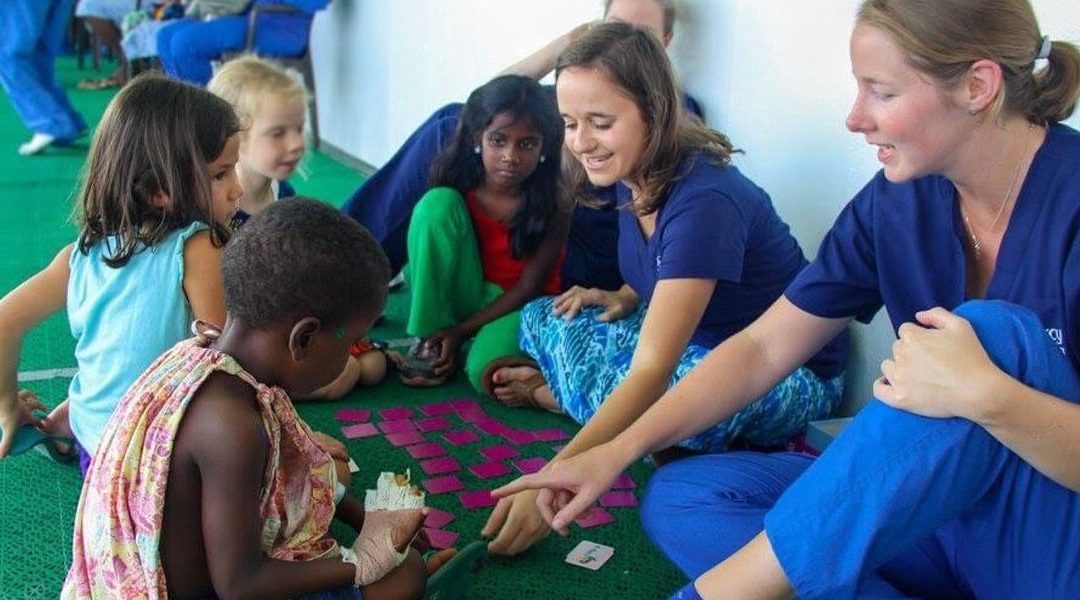 As a teacher, I like having a plan. I like feeling confident and prepared. But on Friday afternoons, when we walk out of our classroom and into the noise, heat, and chaos of deck seven, all of that is thrown out the window. I am no longer certain of the rules, the schedule, the culture, even the language. I no longer know where everything belongs. In fact, I no longer know where I belong.

Deck seven is the first deck onboard that opens to the outside world, and from 2:30-3:30pm each day the patients climb the four flights of stairs up to this open-air deck where they can be found chatting with other patients, calling home, playing uno, or kicking around a soccer ball. The younger patients ride tricycles and zoom around in wagons pulled by nurses.

At the start of my first year teaching onboard, I knew I wanted to make visiting patients a routine in kindergarten. These precious, hurting people are the reason we are here serving on this ship after all, even those of us who aren’t medical.

On the first Friday of the school year the kindergartners and I made our way out to deck seven and my students were quite apprehensive. They held onto my hand, my skirt, my wrist, whatever they could reach, and had a hard time letting go. One of my littles tugged me down to her height and whispered, “I might like to stay close to you out here!” “That’s ok” I whispered back. Because I understood. As an adult I’m often better at masking my feelings than my five-year-olds are, but the same feelings are there underneath. Scary can be a good and growing place to be, but it’s still scary. Even though we live on a hospital ship, we aren’t down in the wards every day and we never exactly get used to seeing fingers burned together or knees bent in the wrong direction.

I’d like to say that that first time out on deck seven, spending time with the very people we have all come here to serve, was helpful and heart-warming. I’d like to say that we jumped in and did our best to talk to others in French and Fon. I’d like to say that my littles became fast friends with the patients, and that those hurting people found God’s love that day because we came out to play with them. It didn’t exactly turn out that way. It was more like trying to get out of the way of nurses with doses of medicine and awkwardly smiling at patients with whom we really had no other way of communicating. We brought out a princess memory game and spent half of our time trying to get the one patient who wanted to play with us to not flip over all the memory cards at once, and the other half of our time attempting not to get in the way of a National Geographic film team. It was more jostling and overwhelming than glamorous and compassionate, but it was a start.

From our first attempt, we have come a long way. Together my littles and I are working to overcome the fear that we often feel when we see what looks “different.” It can be scary for kindergartners (and kindergarten teachers) who aren’t used to working in a hospital day in and day out to come up close and personal with bandages, clefts, protruding tumors, and wires sticking out of fingers where we know wires should not have to be. But in the face of “different” we also come face to face with what humanity truly is. A person is human because, no matter how bandaged a head or how big the tumor is that is attached to it, I can look into that patient’s eyes and see the divine spark. While my littles wouldn’t put it in those words exactly, they could tell you that no matter if a child has wires coming out of her fingers, she still likes to dot paint and play jenga, just like they do! That is humanity to them.

I have seen the fear dissipate little by little in my students and in my own heart as well. In Scripture it says, “perfect love drives out fear.” As the love we have for the patients grows, the fear slowly ebbs away. It recedes when we choose to spend time on deck 7 even if we’re tired at the end of the school week and we don’t feel like going out. It retreats when I hold a patient’s hand, feeling the wires brushing my skin, and it feels less like strangeness and more like healing. It ebbs away when my spunkiest girl plops into a plastic wagon to ride alongside another five-year-old wearing a pillowcase-turned-into-a-hospital-gown.

Today when we walked out to deck seven, my littles didn’t cling to me and grab ahold of my hands. They laid out the dot paints and paper that we brought and got busy offering these items to any patients who looked eager to try them out. Without my prompting they made sure everyone had the color paint they wanted and then happily plopped down on the deck next to the patients to paint alongside them. Just little humans enjoying the company of other humans.

As the great philosopher Dr. Seuss tells us in Horton Hears a Who, “A person’s a person no matter how small.” In the same way, we in kindergarten remind ourselves that a person’s a person no matter how “different” they may look or sound. Look at those around you, ask God to help you recognize His image in them, then go plop down next to them and offer to play. It works for us!

Have you ever imagined teaching on board a floatin

The Mercy Ships Academy recognizes that there are

Serve as a family or teacher today. https://www.m

When you attend school on a hospital ship and your